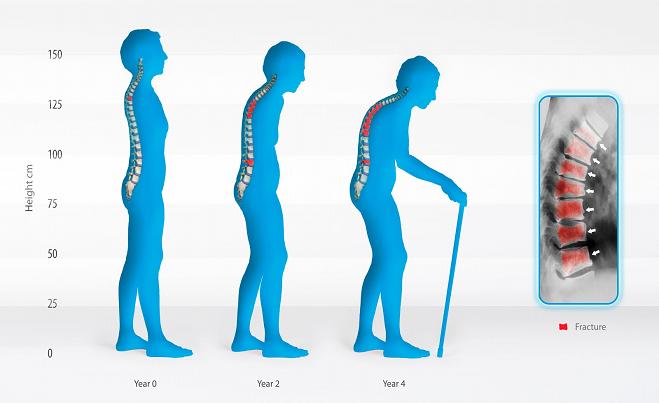 Osteomalacia is a disease that affects the mineralization of the bone in the elderly, causing pain and even bone fractures. Learn about the measures that can help prevent its appearance.

Osteomalacia is a disease of bone metabolism characterized by decreased bone mineralization. It is a problem that primarily affects the elderly. When this same disorder occurs in children, it is called rickets, and in this case, the growth plate is also altered.

Calcium and phosphate salts are required for bone mineralization to occur. The absorption of these substances, and more specifically that of calcium, depends on vitamin D, whose primary source is the skin, synthesized by the action of ultraviolet light that we receive from the sun’s rays. In this way, an adequate supply of these three substances is necessary to mineralize the bone matrix and the ossification process to take place correctly. The most common causes of osteomalacia are alterations in the metabolism of vitamin D and phosphate.

Who and how does osteomalacia affect?

Osteomalacia is a relatively common disease in some areas of the world. It is estimated that it affects about 20-25 million people in the United States, being especially common in the elderly and postmenopausal women. From a geographical point of view, it predominates in Asian countries, especially in people of the Hindu race, while rare in Africa and Latin America.

The intensity of the symptoms varies from one patient to another. In fact, in many cases, the patient is asymptomatic despite suffering from the disease, while in others, they may experience a lot of pain. The clinical, analytical, and radiological manifestations of this process are variable and can be confused with other diseases, especially osteoporosis, a systemic disease of the skeleton caused by a loss of bone mass and an alteration of the microarchitecture of bone tissue. This causes greater fragility of the same and an increased risk of fractures.

Different preventive measures can be implemented to help prevent the appearance of osteomalacia. If the disease is already established, it is necessary to start treatment, as we will see below, and the response to it is usually quite good.

Many causes can cause osteomalacia, but the most important are two: the alterations of vitamin D metabolism and phosphate metabolism alterations. These substances are essential for adequate mineralization of the bone to occur, which is why their decrease or absence produces a weakened bone that has a higher risk of suffering deformities or even fractures.

What You Need to know about Kangen Water

ClearCorrect: the Way It Performs and It’s Expense

Remedies for your site throat

Legal admin - September 28, 2021 0
People frequently go overseas for one of three reasons: education, employment, or the advancement of an organization. This implies that all papers...

Business admin - August 21, 2021 0
At the beginning level, Forex trading might be tough for you. So, if you’re not properly ready, you might face problems. That’s...

Sport admin - June 23, 2021 0
Playing games is something that is loved by everyone. Games keep us mentally and physically strong. Games keep us fit by playing...